Let’s do some work this morning. 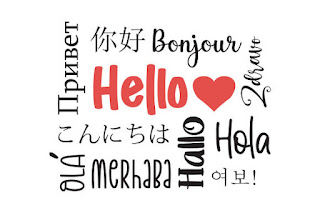 Language is what we celebrate … the Bible makes it clear: language is what it means to be created in God’s image … God speaks, things happen … God’s word creates the world … Jesus is called, “The word of God incarnate” … by words we learn from one another … with words we encourage one another … we say, “I love you” … we say it with words … or sign language … we write it … create Hallmark cards, make the music and write the songs …

The power of words to harm or to heal … to incite violence, or calm the heart … words to inspire, or words to mislead … we create dictionaries – these days, on line … we take writing courses, learn how to use words effectively … we have grammar software to help us express ourselves more clearly … words are who we are, and how we live together.

Now for some biblical work …

The first 11 chapters of Genesis are sometimes called a pre-history, the backstory to the story of Israel …

The world created by God, good and beautiful … and the hard turn taken – Cain kills Abel, and so it begins – a world given to violence …

The flood story tells the tale of a God who gives up on the human race, a God who’s had it with the species-experiment called human.

God washes the human race outta God’s hair – nothing like a good scrubbing to clean things up.

When the rain finally stops; the flood waters recede, the animals leave the ark two-by-two … all is new … or so it would seem.

The righteous Noah and his not-so-righteous family soon fall into all the familiar patterns of fear and hurt … so what’s a self-respecting God to do?

With the rainbow in the sky, God promises to work with the world as it is … no sense, even for God, to lament what isn’t … no use crying over spilt milk … it is what it is, and it’s the world God has to love … even for God, there is no starting over; there is only one way, and that’s the way ahead.

As the story unfolds, humankind decides to build a tower to heaven  – apparently nothing better to do … they all speak the same language, as the story goes.

Ironically, even as humankind builds toward heaven, heaven comes down, and takes a look around.

God realizes all of this endeavor, all of this pride and power, is built upon a common language.

So, what does God do?

With one quick command, a diversity of tongues … the tower of power and pride is abandoned … folks head out to the far reaches of the earth … north, south, east, and west … to farm the fields, fish the seas, hunt and harvest … to make this world a home.

Let’s jump now to the Day of Pentecost – a harvest festival, 50 days after Passover – a celebration of hope and renewal.

On just such a day, the Holy Spirit pays a visit to the disciples.

Tongues of flame appear above their heads, and they begin to speak in other languages …

Out they go into the streets of the city, the festival in full swing – Jews from all over the Roman world, speaking a myriad of languages, and to everyone’s surprise, the disciples speak the languages of the world.

Just a story? Perhaps, but a story of kindness – there is no single language required … the Gospel is proclaimed in the languages of the world.

Perhaps you know something of the Wycliffe Bible Translators – for many years now their purpose has been to translate the Bible into every language of the earth. To do so, each translator has to learn the language of the people. And then the task of creating the written version, and then the task of teaching people to read. An arduous task, for sure, but at the heart of it all, a deep and abiding sense of God’s purpose – to honor all tongues, all peoples, all races, ethnicities and cultures – because every language is sacred to God, and every language can carry the joy and hope of the gospel.

I’m not saying any of this is easy – it isn’t! To live in a city with many languages is a challenge … jokes abound about taxicab drivers … it isn’t easy, but it’s necessary.

And remember, when we’re doing something right, it doesn’t get easier.

In a nutshell, those who scream at immigrants to “speak English,” violate God’s purpose …

Use Google Translate when needed.

Last summer, my wife and I travelled in France – our knowledge of French is nil, but we found everywhere folks who were kindly on the language – they respected us as tourists; no one said, “Speak French, or go home!”

When the menu was in French, out came our phones with Google Translate – hover over the menu, and there it is, on the screen – translated – escargot and all.

As a nation, we are healthier with a diversity of tongues!

Think of a spice cabinet!

Only salt and pepper?

Rather a cabinet full of little jars and tins – rich and savory seasonings – oregano, cinnamon, chili powder, sugar, turmeric,  paprika, rosemary, cardamon, thyme, and hundreds of other herbs and spices, to flavor our food and enrich our diet.

Hats off to the bilingual … the schools that honor the language of all the children – no ridicule, no scolding, no shame, no humiliation …

Children of other tongues soon learn English … their parents will still speak with an accent … some older folk may never learn English.

Does that deserve a screaming tirade of hate?

Pentecost Sunday – a celebration of language.

The Holy Spirit comes down with flames of language … the original Google Translate … to affirm and honor the languages of the earth.

Language is sacred, language is the heart of God – God speaks the language of every creature, great and small … from the mouse of the field, to the whales of the sea … including you and me.

We may not always understand each other, but if you’ve ever been in a situation where languages are different, it’s amazing what can be communicated with hand gestures, pointing and smiling … everyone speaks the same language of kindness – the smile, a kiss, the hug, and some laughter.

Jesus Christ, the Word of God incarnate, enfleshed, God’s word of love, love for all the earth … every language, every tongue … especially the children of the earth – who play and shout, dream and laugh,  cry and hurt, all the same – whatever their tongue may be.

Today, Pentecost Sunday, we honor the diversity of language. We respect one another, learn from one another.